FIR module does not respond to length changes

In implementing a 256-taps FIR filter I set an FIR module that initiates with 31 taps by default.

When I tried to change the length to 256 taps, the number of taps is updated but not the array of coefficients. That is, if after setting the number of taps to 256 coeffs I try to load coefficients from a csv file AWE keeps truncating the filter to 31 taps. Please note that I also tried to load the awd file and update the coeffs using the MATLAB API and while the procedure did not throw any error I could still see that the FIR filters contains only the first 31 taps.

I have enclosed a picture below. 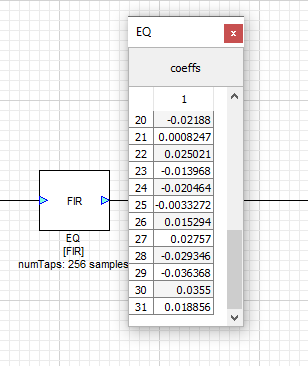 Am i missing something?

Which version of Designer are you using?

This bug was recently reported on the forum for Designer 8.C.1.3.D: https://dspconcepts.com/forums/feature-requests-and-bug-reports/3911-can...

Our platform development team has already been notified and has prepared a bug fix for the next release of Designer.

That answers my question. I am using 8.C.1.3.D. When should we expect the next release?

Our platform development team is currently targeting to make a new public release no later than end of March.

It looks like there are multiple issues with 8.C.1.3.D. When trying to use the biquadCascade module I run into similar issues. I update the number of stages by the coefficient array does not update accordingly. 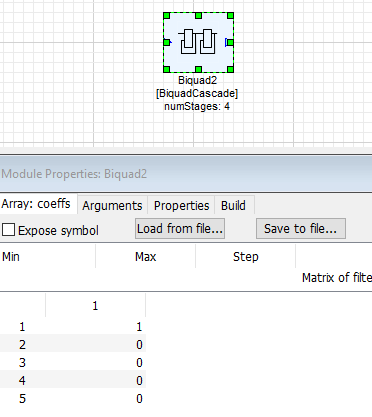 Let me email you on the side about this.